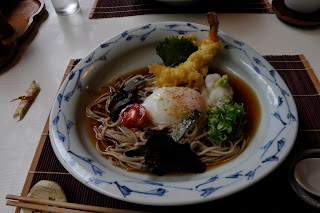 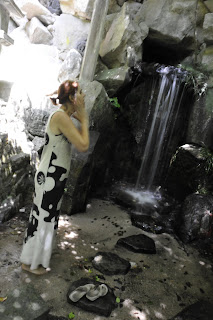 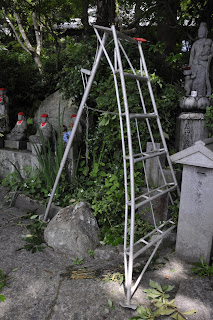 Last night her next-in-line older sister Madeleine arrived from Hong Kong, bearing sweet and funny gifts: good morning towels; toblerone; orange gardening gloves; colored pencils; sand dollars; ginger candy. The kids were ecstatic to wake up and find her there. They decided to visit the Mitaki Temple because Miwako told her that it was one of her favourite places in Hiroshima.

They took a train and walked up to the temple, passing blue tile rooftops, bedding hanging out to sun, a hilly cemetery with all those vertical stones like upright bones. As soon as they entered the temple grounds, everything changed. It was magical, heavenly, mossy. Hundred of buddhas - looking up, grumpy, asleep and carrying babies rest on the wet green hills full of gurgling streams, springs and gushing waterfalls. Little bridges span red sandy creeks that are directed by hollow bamboo pipes. The entire temple grounds survived the A-bomb and the outrageous orange pagoda, built in 1162, was moved in 1951 to the grounds to comfort the souls of the victims of the A-bomb. They thought the orange pagoda was the showstopper but they kept exploring and walking up and around and as they walked, they discovered more temples and buildings and ponds and glistening spiderwebs. They took their shoes off to walk on the cold wet stones leading to a small but powerful waterfall. They only held their hands under it because it was cold and they only had sundresses on. She bought lots of small gifts at the temple counter - buddhas, soft leaves, wooden pagodas - from the most beautiful woman and her fat sleepy cat. The woman refused to be photographed. There was another sleeping cat upon a bright red bench at the foot of the door to the temple. They both photographed it. It was in bliss.

They took their shoes off and sat down in the temple, behind a man praying hard to buddha. He gently picked up the heavy stone buddha dressed only in a red bib and rubbed his tummy and forehead, chanting. He rang a bell several times, threw coins into a soft box, lit insence, held onto a string of beads and laid out paper prayers. He then collected his things and 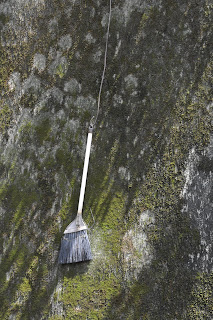 went outside to the mossy hill full of stepped buddhas. He placed his paper prayers in a thick stone trough and poured ladles of spring water over them. He then threw ladles of the cool water up to all the buddhas, giving them a drink, cooling them off. They found another little temple and they both rang the bell this time and sat down for a while and prayed. She thought about everyone n her family and hoped the best for them, for their health and happiness. She felt completely calm and in love with the world.

There are ashes from Auschwitz buried on the grounds, along with the ashes from A-bomb victims. A plea is etched in stone for all of us to integrate humanity more fully into lives. They both paused and spoke about the odd similarities between Japan and Germany, how their mother often said how Japan reminded her of her homeland, Deutschland.

She thinks the monks who live here must be very happy.

They are getting hungry so they walk down the hill a bit to a traditional building they noticed on their way up. Luckily it was a restaurant as they had hoped. But not only was it a traditional Japanese restaurant overlooking a turtle and carp pond, it was one of the best meals she had ever eaten: first a lacquered box served with a handmade painting arched over it, that when removed, reveals three small bowls filled with delights - a delicate cucumber salad, soft seaweed stems and a sesame fish. Next to the box is a porcelain dish of sashimi. There is always hot tea and cold water. Next comes the most beautifully shaped oblong bowl of cold soba noodles in a broth, topped with shrimp and that special Hiroshima leaf tempura, seaweed, daikon, wasabi, the most delicious mushrooms she had ever eaten, and a poached egg. Halfway through this feast, the waitress brings four o-nigiri, her favourite triangular rice clouds filled with surprises and wrapped in seaweed, and a bowl of warm mushroom custard. The custard is the only thing neither of them eat. They end the meal with two perfect triangles of watermelon, bite size.

They decide to walk the ridiculously long way back to the city center instead of taking the train. After over an hour of walking, the cool day suddenly felt hot and exhausting. The difference between the wet hill of heaven and the dry dusty urban maze is enormous. They finally make it to the international meeting lounge and she calls Kahori and finally has an appointment on Tuesday to begin making x-ray exposures and cyanotypes of melted bottles, roof tiles, steel scraps. They go to the thrift shop and she finds too many irresistible things: a bebe skirt and vintage swimsuit for Harper, a power ranger toy and gloves and peace tank top for Guthrie, several shirts and very cool pointy shiny green leather shoes, and the most amazing unbound "childrens books" from 1945. She imagines they were hung up in classrooms as teaching tools for storytelling, writing exercises. They are priceless but each one, at least 10 pages, 11"x14", is only 1$. She may go back and buy them all.

They get the kids who are excited to see them and to get popsicles. They pile into a taxi and Guthrie falls asleep and Harper talks a blue streak all the way home. The kids get into their swimsuits and David makes small pools for them out of dish buckets. They yelp and make puddles and get wet and end up fussy and hungry. She makes delicious spaghetti and meatballs. They drink sake and eat the toblerone for dessert. It is nice that her sister is here. She hopes she is happy to be here.
Posted by Unknown at 6:22 AM