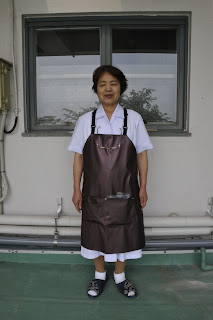 Barthes Forbids Tourists from Writing Haikus
(but here are two):

Cell phones, umbrellas,
everyone has something
against loneliness.

This tourist haiku
will do nothing but pass time.
This is what she wants.


She can not believe that after rubbing two A-Bombed trees and beginning her hungry way home for lunch, she runs into Emi and Myles on their way to Emi's parents' restaurant. She tags along to see where it is so she can try it some day and then Emi invites her to join them! She feels so lucky and even more so when they step inside the perfectly Japanese restaurant where her father, mother, brother and sister-in-law work. They eat bowls of rice topped with Anago - river eel - with dishes of scallions ans wasabi to add if desired, pickled things, little bowls of soup with miniscule mushrooms, floating herbs and seaweed, small dishes of tofu and bean sprouts and an amazing bowl of sardine sashimi served with ginger paste, and green tea from her grandmother's land in the country. She must go back with her husband. It was delicious and lovely. Myles ate lots of eel and rice and even ate a sardine! He seemed to be having a happy 3rd birthday. Over lunch Emi tells her that her grandfather started the restaurant after the war. He had been in Manchuria when the bomb was dropped and he lost everyone, absolutely everyone in his family. She tells Emi that he was lucky to have been in Manchuria but they look at each other and both know that it is very unclear if he was lucky or not. What does it mean to survive everyone you love, to lose them all in a criminal flash? Her brother asks her what she likes about Japan and she says, "the food and the people." They will be going back to Boston next week. She will miss them. It is strange to run into people you barely know twice in such a big city. She had walked past her parent's restaurant several times without knowing it too. Uncanny.
Posted by Unknown at 12:27 AM