The Audacity of Desperation 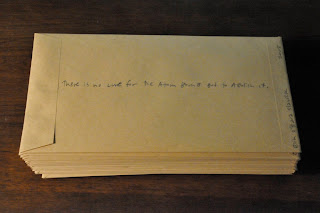 Stack of Envelopes with A-Bombed Tree
Leaves inside 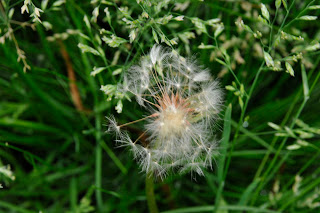 Another Dandelion About to Be Blown


She has a new project that must get to New York by Wednesday for a short show at PS 122: "The Audacity of Desperation is an exhibition (curated by Sarah Ross and Jessica Lawless) of take-away projects and performative conservations responding to the spin of the upcoming election. The Audacity of Desperation is an art exhibition, political action, and on-going dialogue. This show confronts, expresses and unravels states of desperation. Artworks by activists, artists, enthusiasts, and very concerned people, are made in editions with the intention of free distribution to audiences. In this way, these artworks will be activated outside of the exhibition space and in domestic spaces, on bodies, clothes, bags, and in public spaces.
Why we are desperate?
In November 2008 something is going to change. The worst president ever will finally be voted out of the White House. But, as the infamous writing on the wall reads, IF VOTING CHANGED ANYTHING THEY’D MAKE IT ILLEGAL." (Read more about it via the link under Current Exhibitions.)

She will collect 30 leaves from A-Bombed trees and place each leaf in an envelope upon which will be written: A Leaf from an A-Bombed Eucalyptus (or Willow or....) Tree, Hiroshima, Japan, 2008. She has not decided on what else she will write on the envelopes but it will be in the spirit of peace - a call for the end of war and the end of the US government's apocalyptic vision and imperialist-militaristic- capitalist strategies; messages to candidates and voters in America, the land of bombmakers and bombdroppers.

Harper is still asleep after 3 hours of napping. David and Guthrie have gone out for Okonomiyaki - a unique regional dish of a thin pancake topped with cabbage, fish or meat, noodles, egg and a spicy sweet sauce - with David's co-workers. She and Harper will make dinner when she wakes up. She must be tired from the sun today as they took trams to the Peace Park and walked around the A-Dome, rang the peace bell and the golden crane bell inside the sculpture to Sadako, and walked through the Hall of Remembrance. On their way to the thrift shop to buy the kids a toy, they found a playground with a wide slide and functional swings. At the thrift shop, Harper picked out a bag of little girl toys (collectibles), and Guthrie found a Power Ranger belt that lights up and makes noise. The kids clamored for Old McDonalds so they found themselves eating burgers, fries and milkshakes at the crowded McDonalds. They took a taxi home and Harper has been asleep ever since.
Posted by Unknown at 1:09 AM