WE ARE UNITED DREAMERS : Chim Pom and Jason Waite

I posted some photos and wrote a little bit about the Don't Follow the Wind panel at the Hiroshima Prefecture Museum in my last post, but I took lots of notes at the talk and wanted to get them in some shape, so here they are. Don't Follow the Wind is an exhibition in the Fukushima exclusion zones (there are several throughout the prefecture and there are many areas through and in which you can go that are NOT in the exclusion zones. This show is in the exclusion zone.) It was conceived by Chim Pom, a collective of 6 Japanese artists living in Tokyo who provoke, engage, criticize, comment upon and make fun of the world in astute, hilarious and very very serious ways. American curator Jason Waite worked with other curators - Italian and Japanese - to pull the show together. You can watch a 20 minute video - very good - about it here: https://www.youtube.com/watch?v=qWN7d4pBqTs


OK, here are my notes (my comments in parentheses):

There are three levels of exclusion zones. You have to get very special permission to enter them. Some of the zones you must leave by 4pm. Found houses and apartments in the zones in which to the show. YOU CAN NOT SEE THE SHOW. Who knows when anyone can ever return? The show could be there forever, changing, evolving as the towns and landscape do. 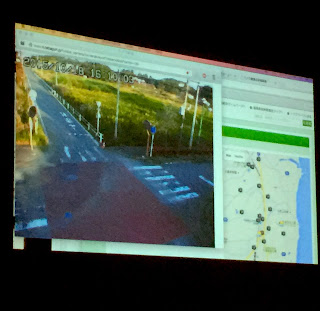 There are 4 exhibit sites. They show a live feed (image above) of an intersection in an exclusion zone - from a security camera installed to protect the possessions, as some evacuated homes have been burgled. There is a 5 year exclusion zone in effect as of now. Chim Pom wanted to do this immediately after the Dai'ichi accident because artists respond immediately. (I learned later that one of the Chim Pom members took a job in the Dai'ichi plant after the disaster to clean it up, to get on the inside!) In April, 2011, less than a month after the accident, before exclusion zones were demarcated Chim Pom did an incredible action: The wore hazmat suits and erected a scarecrow in a hazmat suit near to the plant as a symbol of and for the workers. (I was lucky enough to see a video from that period at PS1 last year in the show Zero Tolerance that included the scarecrow photograph in a room where the video was playing of them in hazmat suits climbing the mountain overlooking Dai'ichi with a white flag spray painted with the Japanese red circle. They then transformed the circle to a RADIOACTIVE danger sign and planted it atop the mountain, blowing with the wind.)

This - radiation - is an international problem. We have to globally recognize it and take the longview. They had lots of support and collaboration with the Fukushima residents, cooperation with finding places/spaces for the show. It took a lot of time to meet with evacuated residents, to track people. As families were on evacuation buses the officials stopped the buses and made all the pets get off the bus, letting them go into the radioactive landscape. Children were hysterical, as you can imagine.

Of course, our first public panel discussion of this project is happening here in Hiroshima because Hiroshima is significant. In Hiroshima, because of the one A-Bomb, the radiation was more concentrated and people were victims (died) or they were victim - survivors. In Fukushima, due to the multiple melt-downs of reactors and their cores, the radiation is dispersed far and wide - out to sea with poisoned water, across the countryside with the wind, into the earth with heavy rains and leaking, radiation is still dispersing....As in Hiroshima, in Fukushima, many people lost each other - not only from earthquake and tsunami related deaths, but also through the evacuation process, Friendships disappeared. There are many suicides.  ONE MAN RETURNED TO HIS VILLAGE WHEN HE WAS ALLOWED AND SET HIMSELF ON FIRE IN PROTEST.

Ever since 2011stories are censored, information that is known is not shared with the public. Fukushima is represented as a place with happy and energetic people looking towards the future.

Even though this is a show that you can not see, the interventions and installations have transformed the houses and spaces just by being there. For example, Ai Wei Wei installed his own personal photographs (while under house arrest in China) in the homes in Fukushima. He also placed solar panels on the roof of that house so that lights come on for 4 hours a days, keeping it "occupied" / alive. The presence of the works reactivate spaces where time stood still. How will the works evolve?

(Chim Pom did not show any of the works. He asked the audience to engage the imagination.) You can see a related show in Tokyo through the end of November, also a very conceptual and almost invisible installation. Ryuta/Chim Pom talks about how artistic practices have changed since Fukushima. (Nobuki Yamamoto, my Iwaki/Fukushima new friend who showed me so much, also said this - that art almost felt useless/routine/traditional but now he is taking great shifts in his work, organizing collective exhibitions in old/closed schools since Fukushima. He is an anarchist.)

(Chim Pom had a skywriting plane fly over the A-Bomb Dome, making the word PIKA = bang. It caused a huge dispute/controversy and their scheduled solo show at Hiroshima MOCA was cancelled. They ended up showing later at the A-Bombed Bank where I have shown twice and lectured. You can read a little here: http://chimpom.jp/hiroshima.html

Perhaps their choice to bring this project to Hiroshima  first, in terms of talking about it, is also partly inspired by their previous actions here.)

Jason Waite, the American curator, had done a political-collaborative project in Iraq that he briefly described. You can see that here: https://triptoiraq.wordpress.com/tag/jason-waite/

A few things he said about the Iraq project: reform methodologies of practice by turning an old prison into a new art space; bodies as subjectivities, vessels for knowledge; affinities with cultural workers in Iraq; utilizing process of cultural work for testimony.

Some of the Don't Follow the Wind exhibition ideas came from residents themselves. One example: a cinema owner in Iwaki, becoming frustrated by the lack of information after the nuclear disaster, used his cinema to record levels of radiation both in and outside the theater and posted them outside every day. There are different forms of communication and many of the Fukushima residents / evacuees rely on RUMOURS. (Nobuki also talked about the importance of rumours - that 500 people had died inside the plant; that dead or dying bodies are kept in secret in Fukushima Hospital.)

Ryuta gave an incredible example of official absurdity. There is a very famous street in Fukushima for viewing cherry blossoming trees. Even though it is in a contaminated area, they opened the gate to the street and advised people to view the blossoming trees from inside their car. Here is a bright yellow sign advising you:

HOW TO GET INFORMATION OUT? THERE IS A DISTANCE BETWEEN THE IMAGE OF FUKUSHIMA AND WHAT IS REALLY GOING ON THERE. One task is to produce an underground railroad of information coming out of the exclusion zones. 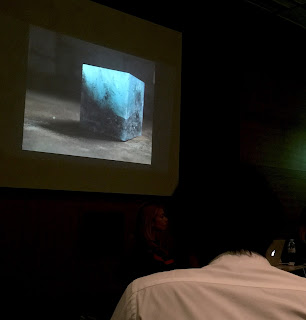 Generally, Japanese artists in the show chose to make work that is not revealed. While foreign artists went the other way - making work to garner press, like Trevor Paglen's Trinitite cube made from Fukushima glass and a piece of Trinitite from the Trinity Test in 1945 - after which the U.S. dropped the atomic bombs on Japan. HOW DOES THE OBJECT FUNCTION IN RELATIONSHIP TO TIME? WHAT ARE THE MATERIAL EFFECTS OF SOMETHING INVISIBLE?

What are the material effects of something invisible?

Another piece, done in collaboration, is called Becoming Monument. They chose a small hut, like a gardening shed, as the focal point. The hut will become a future monument. They took the hut and a 7 meter diameter around the hut and left it UNTOUCHED - per UNESCO's code - and cleaned up everything around it. They took records of the levels of radiation of everything there, done by Kenji Kubota, co-curator. They all did ALL the work. Where and what should be memorialized. One would think the Dai'ichi plant would be the central monument, but the reality of the effects is not in the rupture but in the effects. Location + rituals.

I asked them a convaluted question, having recently been in Fukushima, about it being overwhelming, how do they FEEl, etc. They gave a long answer and here is some it: this is ongoing for the rest of the world and we need to keep it in our minds. There is a double feeling (Nobuki kept using the words DOUBLE BIND in Iwaki) of emotion and distance. There is POWER IN ART through collaborating with others - people with no previous experience with contemporary art, making connections. How can images confront such a big disaster, especially in a media-saturated spectacle? WE ARE ACCUSTOMED TO THE CONSUMPTION OF IMAGES AND OF DISASTERS, but RADIATION IS INVISIBLE - instead of countering it, embrace the invisibility. The only way to appreciate the magnitude is with the imagination. Produce rumours to go beyond the images. Even though we can't see Ai Wei Wei's light going on in that Fukushima house, we KNOW it goes on. Art is a medium. Knowing is important. We are in a struggle for a future memory. THINGS CAN SPEAK. OBJECTS CARRY MEANING. artifacts. WE ARE UNITED DREAMERS, HOW CAN WE MAKE A VERY DIFFERENT FUTURE TOGETHER? There are lots of invisible things. TRAUMA OF INVISIBILITY.

STRUGGLE AGAINST THE PAST FOR THE FUTURE. 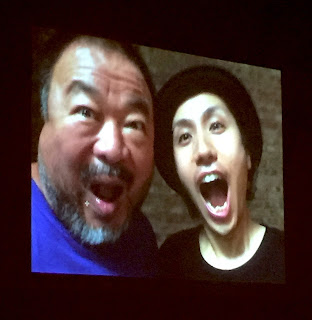