After days of unbelievably positive engagement and inspiration, stress reared its ugly head today. I kept thinking of my students and what I tell them, "As an artist, you spend most of your time schlepping stuff here and there, negotiating and organizing." And even though I was almost in tears several times, the 100 degree day was pleasantly interrupted by divine sushi, hot pickled plum tea, cold japanese tea, gritty green artichoke ice cream and the company and interaction of so many amazingly generous and helpful people.
Here is the Former Bank of Japan, again, where I'll be having my show. 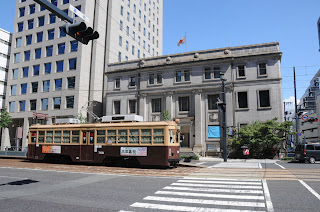 I found out today that due to planning this from the other side of the world and several miscommunications, my show is supposed to open September 20 (not Sept. 17), the day I leave, and the opening MUST be 5-7pm and it is now scheduled and advertised for 7-9pm + my lecture starts at 5 but is advertised for 5:30. There can be no food or drink at the reception because it is an A-Bombed building. I also discovered that I can only begin to install my show in a room where I can not hang directly on the walls at 9am the day of the opening at 5pm. The other show downstairs may need some of the portable walls I was counting on so I am trying to find a truck to transport some great big portable walls on wheels from the Peace Museum to the Bank - 3 blocks away. I am not even sure I can use the walls because they are owned by the City and so far the City has said no to many things because "if they make an exception for me they will have to make an exception for everyone." It will be what it will be but I doubt I will be able to exhibit half of the work I shipped and that I am making here. I hope to return to the Museum tomorrow to make cyanotypes of A-Bombed shovels, locks, bottles, clasps.....if the new boss says yes.....
Steve Leeper, Miwako Sawada and the security officer in the bank, in his brilliant green uniform, helped me move 6 portable walls upstairs before I almost passed out in the extreme heat.
Here is Hiroko Takahashi, an amazing activist and researcher at the Hiroshima Peace Institute. She will introduce me before my lecture. After setting up all the equipment for lecture to make sure it works and is compatible, which it is, yes! she treated me to the most divine sushi on the top floor of SOGO, a nifty department store. She has a 2 year old boy and her husband is a meteorologist in Tokyo. She is very worried about Fukishima and she was marching on Sunday in a protest (for RERF - Radiation Effects Research Foundation, where David worked in 2008 - to tell the truth about radiation) and I noticed them from the tram and wondered what the protest about - question answered! 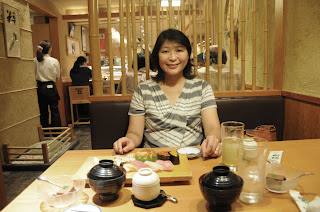 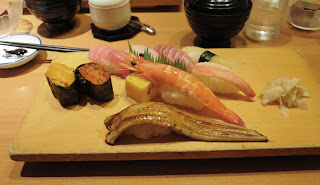 Beautiful Dutch Debbie and Philip on their way "going in peace" from the World Friendship Center to the southern most island in Japan. I love her dress. 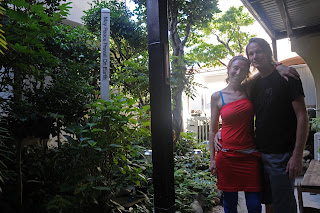 Here Debbie is dressed up as a Geisha in Tokyo! 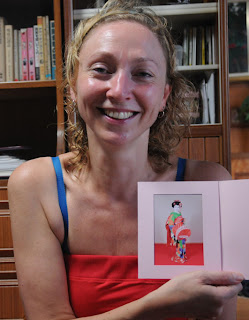 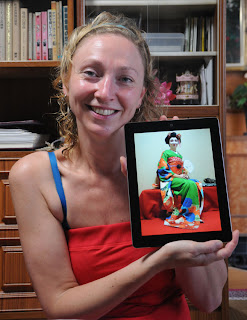