Saturday, October 31, Halloween - 99% of the young women/girls who are "dressed up" for Halloween are covered with fake blood in school or nurse uniforms.

Yesterday, I biked far to my favorite A-Bombed building - the Ugina police station, closed for a long time, a wooden structure that always brings Walker Evans to mind. I photographed it in 2008 with my 6x7 Mamiya, b+w and then again in 2013 in color with my Nikon digital and yesterday in b+w again with my Mamiya, Nikon color and iPhone. It has changed radically every time. I thought seeing it would cheer me up but one side is now pale green aluminum sided and the front porch/steps have been removed and it is surrounded by a fence. I don't think it will last much longer OR the ciy has plans to retrofit it. 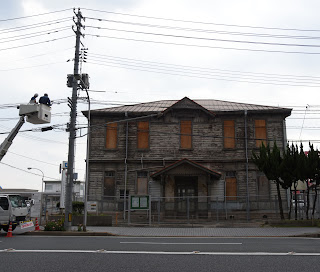 Workmen were working on some lines while I was there, as you can see. I think I lost my beautiful French jacket there. I retraced my biking path home and did not see it.....Down in the Ugina Port area, it is much cooler, windier and you can smell the inland sea...... 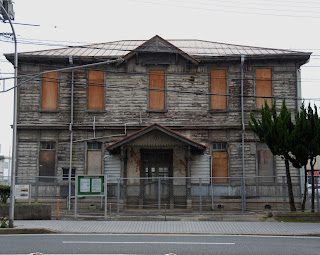 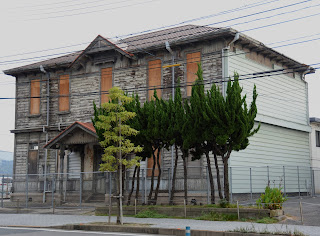 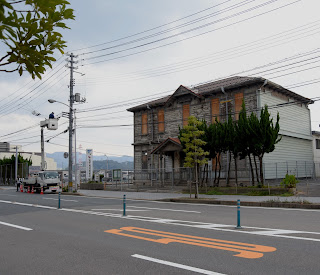 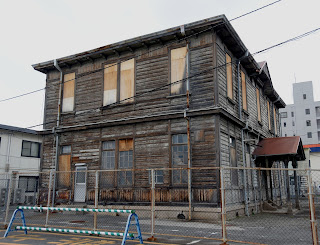 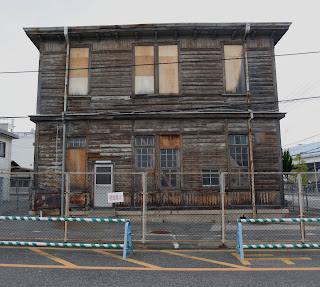 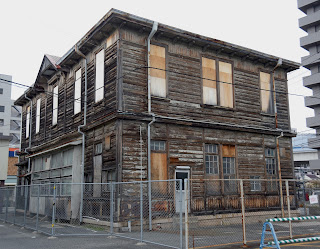 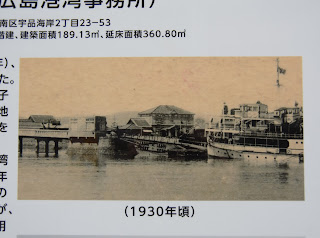 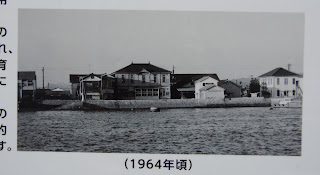 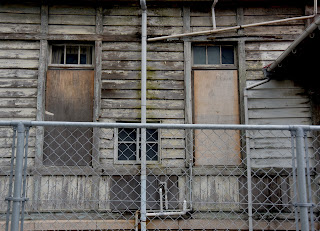 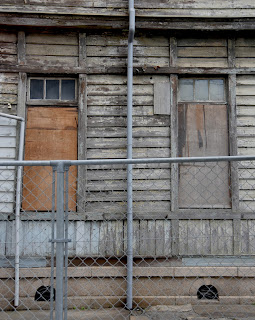 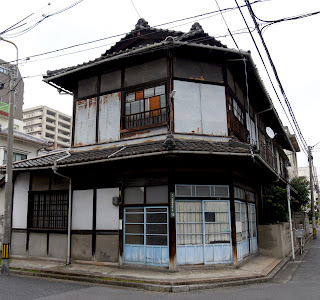 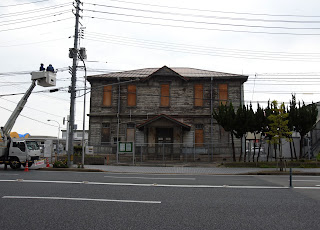 It is such a gift to be borrowing Bo Jacobs' bike - gets me everywhere faster and takes me to new places. I had never seen the infamous Mayuki bridge - where the famous first photograph after the Atomic Bombing of Hiroshima was taken = of shocked and disoriented people huddled and burned, lost and bewildered. I was breathless. I am always so deeply moved - like waves coursing through and over my entire body - when I see the life and continued witnessing of these sites - bottled water, snacks and paper cranes left in memory..... 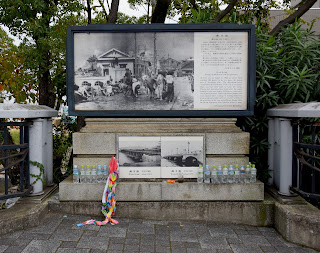 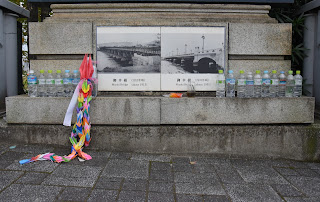 Biking home on the other side of the street, I discovered this A-Bombed site / building. It is so very hard to convey the emotional impact these places have on me and many others - to know what happened, what disappeared, how many lives lost - lives of regular people trying to survive during wartime, erased, demolished, incinerated instantly, some forgotten, and yet, in Hiroshima, so many remembered - like here: 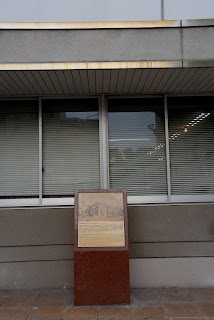 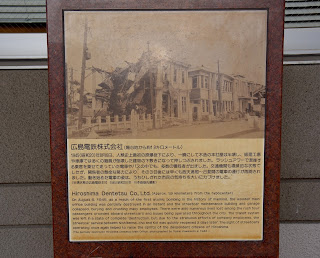 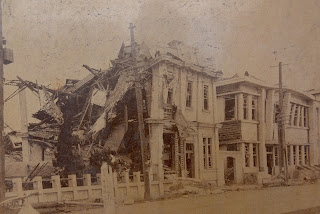 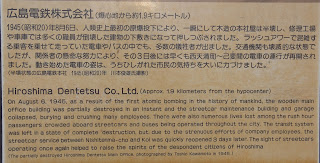 I biked home and realized I was exhausted so I took a rest - and met Bo Jacobs and Carol Agrimson for dinner - a delicious Korean dinner at Bokuden, osyter pancakes (not pictured), tofu - 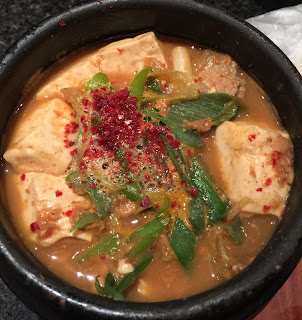 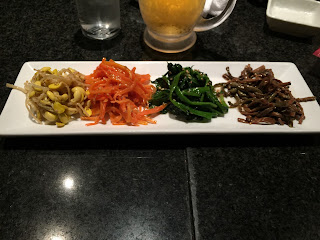 pork belly with daikon and spices in a fresh lettuce leaf - perfect: 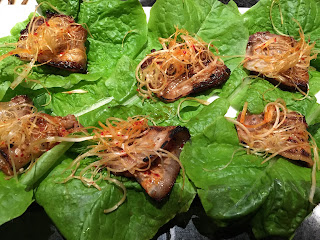 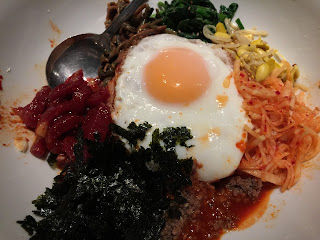 Went to the D-Bar afterwards, afetr walking through the red light district (EVERYTHING is legal except for hetero intercourse - whatever that means / or however they can enforce THAT!) and an introduction to a "WALL OF WHISKY" in a liquor store - amazing bottles - 24 sided glass bottles - of award winning Japanese Whiskies, so in their honor, I had a whiskey sour with Japanese whiskey - delightful: 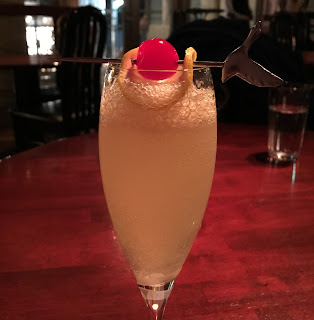 Gearing up for a 2 night trip to Nagasaki with my lifesaving dear friend Michiko and Kiriko, I took the day to run errands and do some shopping: get 120 film, money, a new phone card for my Japanese phone, a scarf, hat, shoes - the necessities (a woman can never have too many pairs of shoes!) Took this selfie just before going out - in my thrift shop Japanese top in front of my precious $5 Obi cloth: 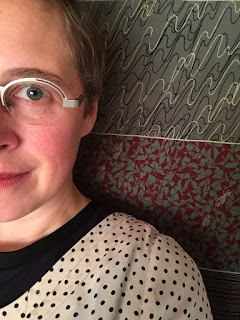 Treated myself to the best tempura lunch in the world - TEMPURA ARATANI - a place Carol tried to take me too this week but it was closed. I happened to stroll by and was hungry so went in - only 10 seats at a semicircular bar around the chef.......If you ever find yourself in Hiroshima - go here!

Always welcomed, with everyone trying to communicate with me in English, always feeling so shamed to be an American, but not due to any of their doing - everyone is so nice. I am served delicious hot barley tea and gingered greens, miso soup, cold water on the bar for you to help yourself, a sweet chef who said he was getting nervous because I was "seeing so hard" at him:

He gave me a sweet dessert gift after my lunch - a thin slice of pork wrapped around a special big grape tempura - eaten in one bite! 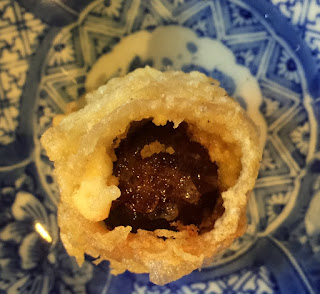 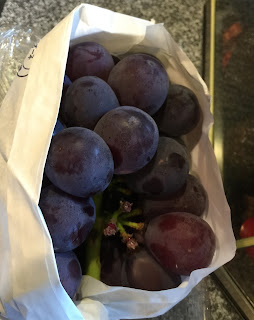 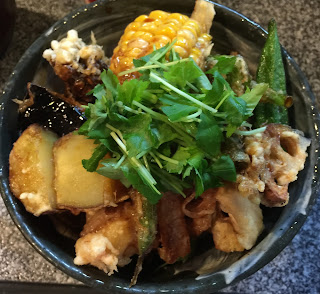 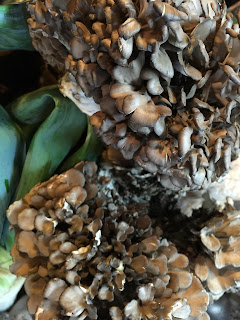 the tiniest sweet potatoes I have ever seen! 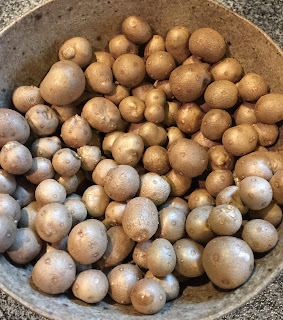 I finally found your post!
The very thing " Amazing " !
I found you had a good time in our lestaurant.
And I also found you understood my poor and strange English.
I'm so glad that it made you happy.
I'd like to know more about you, so I'll keep reading
your beautiful website with my poor English.

May I have your permission to link our site to this page?
https://www.facebook.com/tempuraaratani
Kazumi aratani